Pictured below is Kiwi. 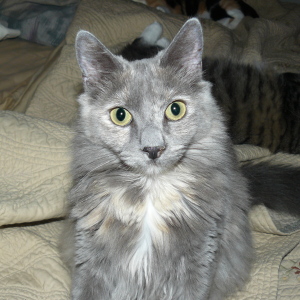 Believe it or not, I actually like this cat. The reason for this should be obvious, I mean look at her, she’s adorable!

Kiwi is one of the many cats that were brought home from the Human Society to be “fostered”. At the time she was covered in mange and way too young to be away from her mother. My wife and daughter spent countless hours treating the mange and bottle feeding her while I tried to pretend she didn’t exist. Now, you’d think all of that TLC would have resulted in a strong attachment to her caregivers, but you’d be wrong. No, she likes me.

Kiwi will crawl up into my arms while I’m seated on the couch or in front of the computer, nuzzle my face, and then work her way onto her back until she is being cradled like a baby. Sometimes she’ll reach out with her paws, put one on each side of my face, and meow softly.

Considering what it took to bring her back from the brink, my wife is pretty emotionally invested in Kiwi. When she sees Kiwi and I together she experiences some combination of dismay, betrayal, or gag reflex. Hey, what can I say, Karma’s a bitch.