With all of these cats, you didn’t really think there’d be one named Skinny Girl without a corresponding “Fat Boy”, did you? 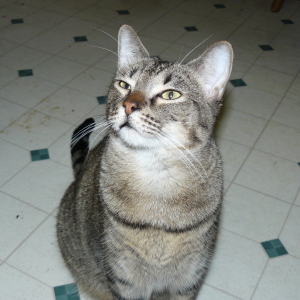 Fat Boy is in fact Skinny Girl’s brother, and has the distinction of being the very first cat in our house with a penis. Others would follow, but he was the first. Respect.

Fat Boy is the exact opposite of his sister, the yang to her yin. He struts around the house like he owns the place, and is not easily startled or intimidated. He is so arrogant and obnoxious that if he catches you cleaning a litter box, he’ll run straight in to drop a deuce while you’re cleaning it.